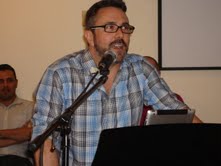 On Saturday May 11 the Patisserie was cooking up a lot more than croissants and buns.  As a matter of fact there were a lot of hot buns filling those seats as we came to see Timorell and his talented cast in the musical workshop called "Taint". The name alone was intriguing enough for us to come and support the charming and handsome Timorell instead of staying home and watching our Tivoed episodes of Smash.  (You all know who you are)  Now the word "Taint" as defined by Wikipedia, my own personal bible, means "debased "dirty" or "soiled".  And more than a few audience members fell into that category.  (Just kidding.) This multimedia presentation opened up with a film as Timorell asked various people what the word "Taint" meant.  Yes there were a lot of dirty answers to that question as you can imagine.  And then he defined "Taint" as the area between your who who and your ha ha. This nasty area did not seem to be gender specific.  How come Wikipedia didn't tell me that? 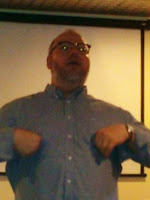 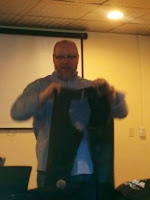 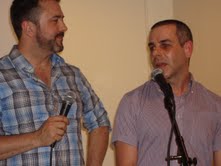 But the lovely duo of Johnny Hager and Leo Campos made everything seem nice and clean again, especially in the Sondheim piece" Marry Me A Little."  And we loved learning about just how southern Timorell's roots were, from playing piano in church at 14, to a family who settled a place in Tennessee called Morell Town.   I love that there is a town named after his family.  I'm jealous.  I grew up in the Bronx...  There were even snake handlers where he grew up, with Dolly Parton as a neighbor. (I had Ralph Lipschitz).  And a fabulous video he shared with us from a cousin's wedding that I was just achin to see more of.  And here is "Taint" again as in "Taint Never Hear-d a 'Such Country Talkin". (Being from the Bronx I did not recognize this as English).  Donovan Jones even went to fiddle camp, and Mark Wadley sang a song in Chickanese as the Chicken Lady.  This part of the show was so down home and funky, it made you forget about that little southern peach Reese Witherspoon, who was arrested on a DUI.  We forgive you Reese you poor tainted thang you!  Personal experiences about being gay were shared as Chris talked about being in the closet  through high school and coming out in college when his gal pals said "we knew you were gay, you know all the show tunes". The tune
"Mean" really said it all about bullying with "Someday I'll be livin' in the big old city and all you're ever gonna be is "Mean".  The lyrics about a relationship where the couple  has been together many years and are now "in a hospital in separate beds on different floors" was a  hard reality slap, in a show that was for the most part, a humorous commentary on being gay.